Cinema Review: Once Upon a Time in Hollywood… 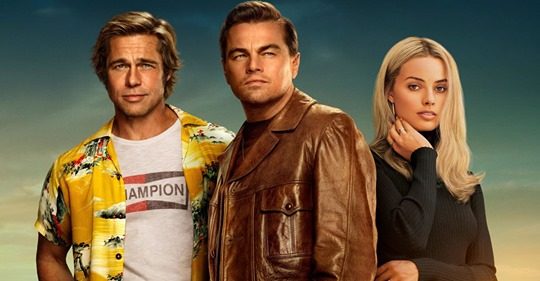 Rick Dalton (DiCaprio) is a faded TV cowboy who, as the work dries up, spends his days’ guest-starring on other television shows, contemplating a ‘step-down’ move into Italian cinema and driving around with his stunt double Cliff Booth (Pitt).

As a stunt double, if the work has dried up for Dalton, it’s also dried up for Booth so, to this end, Booth is more a driver and handyman than anything else.

Both men realise they’re at the tail end of their careers, but neither is willing to give up the dream. Not just yet.

Dalton notes that hot new director Roman Polanski (Zawierucha) has moved in next door with his young wife Sharon Tate (Robbie). Polanski is riding high after the success of Rosemary’s Baby and Dalton feels Polanski could give his sagging career a boost… if he could just get in to meet him.

If you know who Sharon Tate is, you know what happened to her and you know how it all played out.

Needless to say, the scene has now been set for the worlds of all our major players to collide on that hot August night in 1969.

Tarantino is foremost an exquisite storyteller. It’s in his way and on his own terms but make no mistake, this is a beautifully crafted, finely nuanced, multi-layered story that you cannot help but sink into.

Aided by distinct colour palettes, lighting filters, Tarantino’s renowned camera work and a killer soundtrack, they could remove the actors and you would easily know who should be on screen at any given moment. That is a gift.

The movie, far from being the dark and sinister offering as I suspected it might be, while not being quite the opposite, is still a movie about love and relationships. While there’s always the shadow of the Manson family hanging over the characters and a sense of foreboding as we edge close to that night, it’s never allowed to weigh down the story.

Tate is shown as an exuberant, happy young woman who delights in going to a cinema, watching herself in a movie and feeling thrilled when the audience laugh when they’re supposed to and even applaud. And I didn’t sense this was to counteract the horror of her fate, but is just the way Tarantino wants us to know her.

Remember, this is Tarantino’s fairy tale. The movie’s title starts with Once Upon a Time … It’s all right there in the title.

Punctuated by Tarantino’s signature violence, however, it’s not until the movie’s final scenes play out that the more squeamish among us (myself included) may want to look away. And they are horrifically violent and disturbing scenes.

Ironically enough, you’ll leave the theatre feeling like you have just watched a fairy tale. As I replayed the movie in my mind, I smiled and even felt a little wistful.

Once Upon a Time … in Hollywood marks the first time Hollywood powerhouses Pitt and DiCaprio have worked together and if they do nothing else, they’ll always have this movie.